FURIOSA #1 Is An Essential Companion To MAD MAX: FURY ROAD 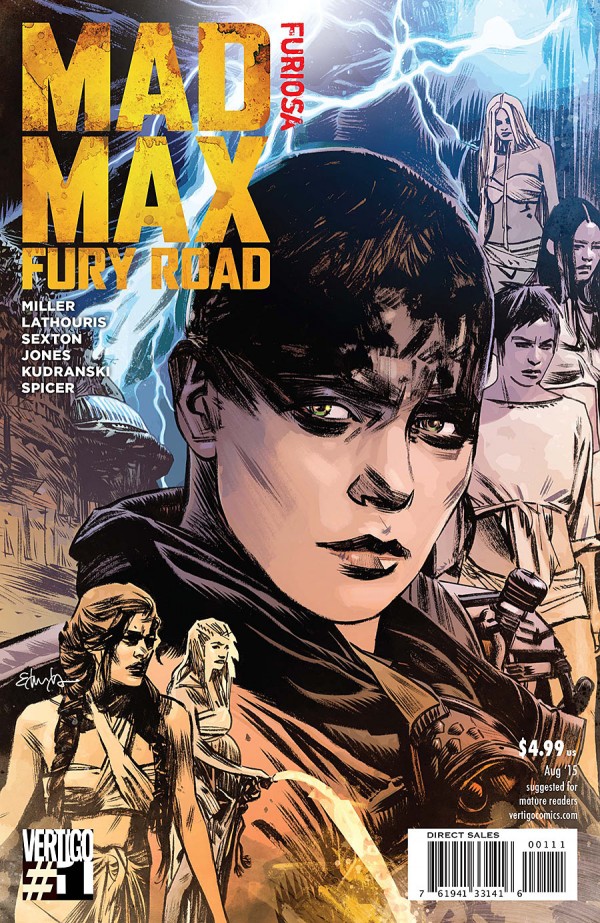 Mad Max: Fury Road: Furiosa #1 continues the overarching meta-narrative construct used in Nux & Immortan Joe #1 (click here to see our review). Unlike the Immortan Joe issue, this one doesn’t provide the origin story of Imperator Furiosa but rather reveals the motivation for her actions in the film via events leading right up to the movie’s beginning. In this sense, there is a much stronger sense of continuity and a greater sense of urgency.

Furiosa #1 gives us an inside peek inside Immortan Joe’s sequestered chamber where he keeps his wives imprisoned for his exclusive sexual pleasure and for the purpose of bearing him healthy male heirs. There’s definitely a perverse element of voyeuristic thrill as we’re allowed inside this forbidden chamber to see what goes on inside it.

What largely goes on is, well, what you’d expect. But it turns out there is also great beauty and wisdom hidden within these ensconced walls and it is here that the heretofore mysterious Miss Giddy gets her due as a character. Lest Furiosa’s brand of badassery become the only manifestation of strength that people recognize, Giddy is an ambassador for strength in the form of quiet patience and perseverance. She’s a great character and we only wish we could see more of her.

Furiosa #1 is definitely a much darker, more claustrophobic issue that quite adroitly creates a sense of being trapped together along with the characters such that watching the film again after reading this comic would probably feel like an exhilarating break for freedom. And although as a villain Immortan Joe has been affectionately embraced by the geek community almost as much as Heath Ledger’s Joker or Darth Vader, this comic goes to lengths to show just how menacing and horrendous a tyrant he really is. There are panels that will quite literally make you cringe either with disgust or loathing.

Of course, I haven’t even yet mentioned the central figure this comic issue is titled after. But have no fear for your beloved Furiosa is depicted in a way that’s true to the character we see on the screen. Just don’t read this comic expecting more of the same from the movie because while the Furiosa we see here feels authentic, it is a different side of her. Essentially, what we are shown is the calm before the storm that makes the storm a more logical result of what has occurred before. From a literary perspective I feel this was a wise choice made by the script writers, Mark Sexton and Nico Lathouris (from a story by George Miller).

Almost as if visually echoing this more subdued portrayal of Furiosa, artists Tristan Jones and Szymon Kudranski shroud their hero in shadows and darkness. She is often drawn standing in corners, a passive observer just like we are, seemingly nonchalant but with luminescent eyes that betray a watchful vigilance. And colorist Michael Spicer once again makes liberal use of the orange and brown hues of the lifeless wasteland that, in their limitedness, add to the claustrophobic feel of the setting and story.

Mad Max: Fury Road: Furiosa #1, quite more so than Nux & Immortan Joe #1, feels like an essential complement to the film if you want to better understand why Furiosa does what she does. And especially for those who have adopted the shaven, warpaint glazed warrior as their personal hero, this comic is an absolute necessity.

2015-06-17
Mad Max Universe
Share
Previous THE ART OF MAD MAX: FURY ROAD Is A Must For All Mad Max Fans
Next Will Scrotus Be As Compelling A Villain As Immortan Joe?
Loading...
© Copyright MadMaxUniverse.com 2022, All Rights Reserved
Powered by WordPress | a