Home / Opinion / THE ART OF MAD MAX: FURY ROAD Is A Must For All Mad Max Fans

THE ART OF MAD MAX: FURY ROAD Is A Must For All Mad Max Fans 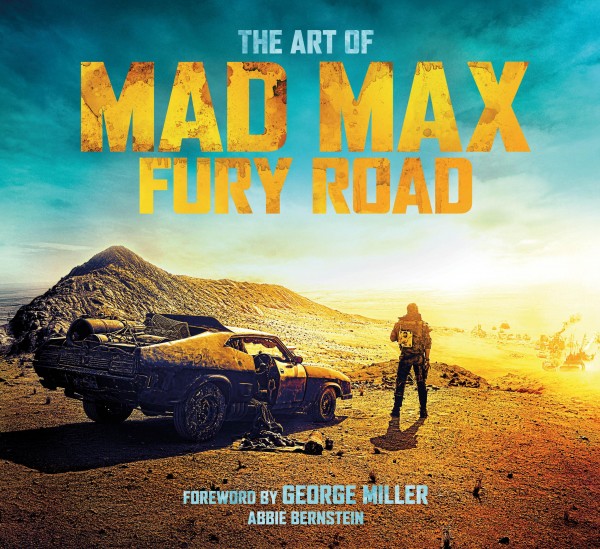 Having collected movie tie-in books and magazines since Tim Burton’s Batman in 1988, I consider myself something of a connoisseur when it comes to companion books, and let me just tell you right off the bat that The Art of Mad Max: Fury Road is the crème de la crème of movie companion books.

At $39.95, the retail cover price may seem a bit hefty at first that’s only if you haven’t seen the book in person yet. Considering the size of it, the quality of the material it’s made of, and the premium content packed between its covers, it’s actually a real bargain.

The tome begins with a foreword by the conductor of chaos himself, George Miller, and his intro sets the tone for the contents to follow. This isn’t one of those half-hearted, throwaway forewords for a book intended to merely sell a bunch of copies and make more money. No, these are the words of a filmmaker who intended, it seems, for this book to serve as part of the overall experience of watching Mad Max: Fury Road.

Upon reading Miller’s foreword you’ll then be washed over by a deluge of fascinating facts and anecdotes accompanied by a veritable mother lode of beautiful conceptual art and photos. The cumulative effect is that not only will your appreciation of the movie be amplified manifold but you will quite simply be left in awe of the monumental scale of the planning and logistics involved in the making of this movie. The attention to detail is quite staggering, to be honest, and you will see and learn so many new things that even four or five viewings of the film would not be enough to cover. And some of these things are just not revealed by the movie itself so you’d never catch on no matter how many times you saw it. 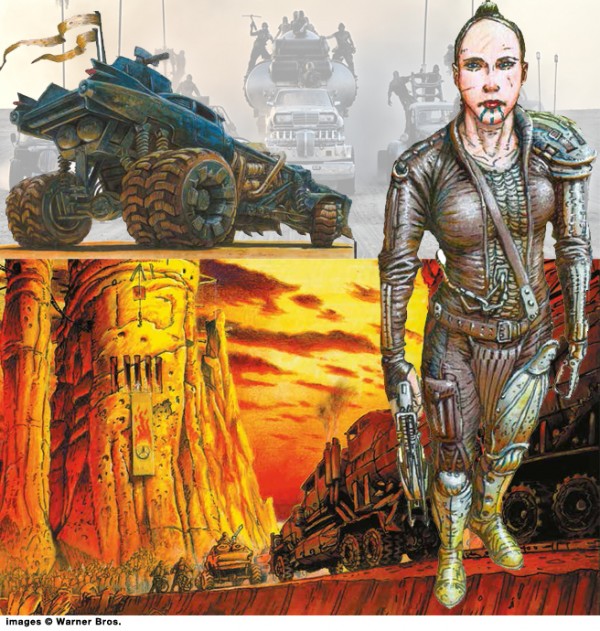 For example, some of the details that the book reveals about minor characters like Coma the Doof Warrior and Miss Giddy are things that the movie doesn’t tell us, at least not directly. Other things you might have guessed or deduced on your own but wouldn’t be able to know for sure unless this book confirms it for you. Case in point: if you thought that the mounted Cadillacs of Immortan Joe’s Gigahorse resembled two humping animals, well, you weren’t mistaken because that is exactly what it was intended to symbolize, partly. Witness the following quote by genius production designer Colin Gibson:

The Cadillacs are mounted one atop the other, Gibson  says, and any resemblance to a sex act, much on the Immortan’s mind, is intended. ‘A lot of the muscle car stuff is about c**k and this is indeed about c**k and copulation, so they are meant to look like they’re humping at high speed.’

Author Abbie Bernstein skillfully fills these pages with tons of useful and interesting info, and reading it all will take almost as long as a short non-fiction book. But for those inveterate browsers, the real star of this volume is the art—not surprising considering the title. Combining the work of artists Brendan McCarthy,  Mark Sexton and Peter Pound along with the photography of Colin Gibson and Jasin Boland, it’s no exaggeration to say that the art and the photography contained in this book will dazzle you. Whereas the movie moves at such a breakneck speed that it’s difficult to truly appreciate the loving attention to detail, here you can pore over each and every image and page for as long as you want, savoring the feels from the movie that the images conjure up.

Seriously, if you’re at all a fan of the Mad Max franchise, or of Fury Road in particular, this book is an absolute must. Of all the tie-in items we’ve reviewed on this site so far, if you could only afford to buy one thing we say get this book. You will NOT regret it.

Buy on amazon
User Rating: Be the first one !

Previous FURY ROAD trailer song “Save Yourself” released on iTunes
Next FURIOSA #1 Is An Essential Companion To MAD MAX: FURY ROAD
Loading...
© Copyright MadMaxUniverse.com 2021, All Rights Reserved
Powered by WordPress | a