You gotta hand it to the creative minds behind this year’s output of Mad Max media: Fury Road, of course, and then the comics from Vertigo (yes, we know a lot of people hated ‘em) and now the new game from Avalanche Studios and Warner Bros. Interactive. They planned these works such that in terms of plot, nothing in the game or comics blatantly contradicted anything from the movie. Granted, we aren’t talking like Marvel Cinematic Universe-level of planning here, and the plots in all the Mad Max media that came out this year were very simple, making it it easier for the game and movie to not clash against each other.

But without being overly obvious about it, the Mad Max game serve as a lead-in to Fury Road that at the same time stands alone as its own story quite nicely. Not that the story is all that sophisticated or anything – this is Mad Max we’re talking about, after all. Primal needs rule paramount here, and all possible plots would by necessity revolve around the need for the basics like food, water, fuel, safety and, going beyond that, power as a way of securing more food, fuel, safety, etc. In this case, Immortan Joe’s third son (who was mentioned in the comics but not directly mentioned in the movie), Scabrous Scrotus,  is the chief baddie who has established power for himself so as to hoard these basic necessities.

The level of the game’s independence from Fury Road – and the absence of Furiosa – might disappoint some players, but once you’re well into the game you’ll find yourself immersed in its world and enjoying everything about it. For some people, the way Mad Max stands apart from Fury Road will actually serve as a nice, refreshing breather from the in-your-face cultural politics that somewhat overshadowed their enjoyment of the movie – that and the fact that Max is the central hero here as he was in the original trio of films.

The setting in Mad Max is what you’d expect: a desert wasteland littered with barbaric savages and ne’er-do-wells. There are various tribes of these and within each faction are several leaders that Max must destroy over the course of his adventure. In the game’s opening cut scenes Max loses his famous V8 Interceptor and it becomes completely junked. Shortly thereafter he meets a hunchback mechanic named Chumbucket who offers to help Max build an even better vehicle he calls the “Magnum Opus.”  Chumbucket becomes Max’s, well, chum in the adventure and rides along with him in the back of the car to perform spur-of-the-moment repairs.

Much like developer Avalanche Studio’s Just Cause series, Mad Max is an open world game, and the influence of the Just Cause games is apparent from the map and fast travel system to the somewhat clunky way Max jumps to a higher platform. Movement on foot feels very mechanical outside of combat, and falling off the edge of some rock can seem like the dropping of an action figure. Often the player will fall to his death because of sloppy interaction between the character and the world. It’s not such a big problem but it can definitely be a bit frustrating sometimes.

Where Mad Max excels is in the hand-to-hand combat which is modeled after Arkham Asylum and Arkham City. While not a terribly unique system, the fighting flows well and is very viscerally gratifying. 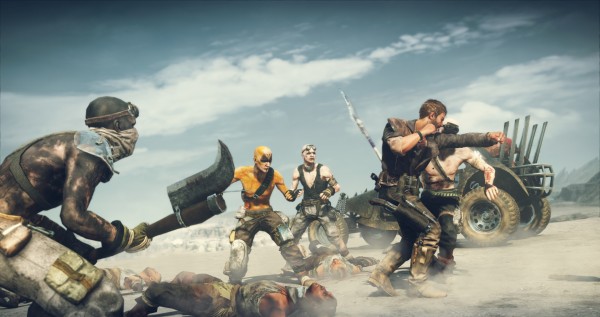 Besides the hand-to-hand combat, what raises this game up from a run-of-the-mill sandbox to something special is in the driving. Woe to any game that would purport to call itself Mad Max but didn’t bring care and attention to the driving mechanics. Well, no worries because this one does.  It’s clear that a great majority of the developer’s efforts went into the driving, car customization, and vehicle combat elements. As the bread and butter of the game play, the driving doesn’t disappoint . The guttural sounds of a V6 or V8 beast thundering into high gear as you rip over the barren expanse feels just as cool as you could imagine it to be. Smashing into a rusty war machine teeming with War Boys is so exhilarating that it’s very easy to get distracted from the main quest and just drive around, looking for things to smash into.

Car controls are smooth as butter and feel natural. the vehicles is also very fun without heading into Need For Speed territory, letting you pick from upgrades like ramming grills, tire styles and armor. Everything you can do to your car authentically looks and feels like it belongs in the Mad Max world. 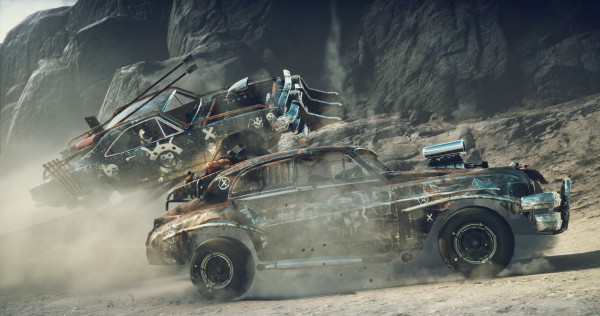 Being an open world game there are loads of side missions. Everything from racing to infiltrating rival tribe camps for their resources to finding project parts that upgrade your main bases of operations. You might think that the limitations of having to find fuel for your car and water for your health would seem at odds with the open world dynamic. Mad Max simply sidesteps this issue. Water is rather common to come across and gas cans used to refuel vehicles or blow up structures are strewn about in nearly every location like they were not the scarce resources they are. This might seem to go against one of the most basic premises of post-apocalyptic fiction, but in the case of a game like this it actually seems necessary and I can’t think of any other alternative that would have worked.  My sense is that the developer originally intended for gas and water to be scarce in the game world but then realized it would have been too limiting in terms of game play. They therefore create the illusion of scarcity while making both water and fuel as readily available as you need. If you think about it, though, even the movies are kind of guilty of this, especially Fury Road. I mean, look at those monster vehicles! If gas were truly that rare it wouldn’t make sense to drive around such gas-thirsty beasts.

All in all, despite a few very minor shortcomings Mad Max is a blast and lives up to most of our expectations. We dare say that some fans will even like it better than Fury Road.

Ladies and gentlemen, start your engines!

Some fans might be disappointed by the absence of Furiosa or more explicit ties to FURY ROAD, but the MAD MAX game is the closest you'll come to feeling like Max Rockatansky himself.

User Rating: Be the first one !