Because Mad Max: Fury Road is essentially a two-hour chase scene—albeit a spectacular, mind-blowing one—there wasn’t enough time or space to devote to deeper exploration of its numerous intriguing elements. Subtle aspects of world-building, the increasing mythicization of George Miller’s world and, most especially, the characters: by necessity these had to take a back seat, so to speak, to the face-melting chaos and fury of the action.

Miller, himself probably wanting to explore these things further but knowing that he would not be able to within the focused vision that he had for the film, teamed up with Vertigo Comics for a 4-issue miniseries that would serve as a prelude for the film.

The first of these, MAD MAX: FURY ROAD – NUX & IMMORTAN JOE #1, hit comic shops today and it’s a strong start to what is the comic miniseries of 2015 I’ve been most looking forward to.

Nux & Immortan Joe #1 tells the origin stories of both the War Boy known as Nux and Immortan Joe, the contemptible yet undeniably terrifying and charismatic villain of Fury Road.

Nux’s story is at once charming and tragic as his qualities of tenacity and strong will are shown to reveal themselves at an early age, saving him from almost certain doom and lifting him to a slightly higher station in life. The story’s short, a bit too short for me, in fact, as I am a fan of the character. In fact, I expect that the entire miniseries will feel too short for a die-hard fan like me, but when it comes to Mad Max I’ll happily take what I can get.

Immortan Joe’s origin story takes the better part of the book to tell, and it’s more or less what you might imagine it to be for a guy like him, but that doesn’t make it any less entertaining or interesting to read. Intrinsic to Joe’s back story is the story of the Citadel and this alone could have easily used all the space in this first issue. You’ll get to read a little about his two sons who appear in the movie, Rictus Erectus and Corpus Colossus (here referred to as Corpus Calossum) and even a third one that I don’t remember seeing in the film. You’ll also get to see how he establishes the practice of keeping many wives towards the goal of producing a healthy male heir. Again, this too is inherently fascinating (it’s the premise to Margaret Atwood’s The Handmaid’s Tale, after all) and could have easily taken up an entire issue on its own.

MAD MAX: FURY ROAD – NUX & IMMORTAN JOE #1 has a wealth of comic talent behind hit. George Miller himself was involved in coming up with the back story and Nico Lathouris (co-screenwriter for Fury Road) and writer/artist Mark Sexton turned that story into a script. Sexton himself and three other artists—Leandro Fernandez, Riccardo Burchielli, and Andrea Mutti—take turns with the art throughout the book, their work divided by sections. Usually when a comic book does this the difference in styles can be jarring but here, for some reason, it feels seamless, perhaps due in no small part by the consistent coloring of Michael Spicer who maintains the arid atmosphere of the film with his shades of yellows, browns and reds. 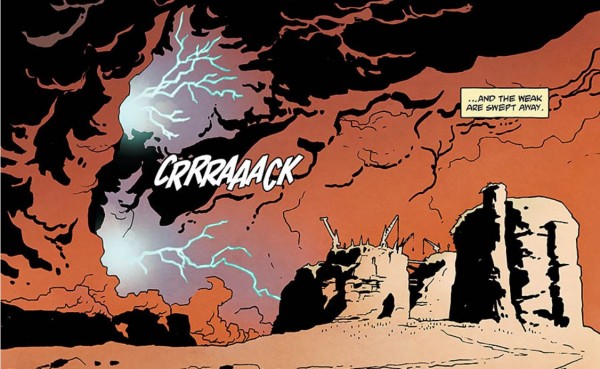 In terms of the art, Mark Sexton’s tattooed storyteller, a character who binds the different narratives together, is a visual marvel and was a definite highlight of the book for me. Of course, I musn’t neglect to mention the majestic cover by Tommy Lee Edwards which borrows an image from one of the film’s production stills.

Overall, I consider this a very promising start to Vertigo’s Mad Max miniseries and makes me look even more forward to next month’s Furiosa #1. If you saw Mad Max: Fury Road and loved it as much as I did, definitely pick this one up to get a richer understanding of the world and back story leading up to the events we see on screen.

Buy on Amazon
User Rating: Be the first one !