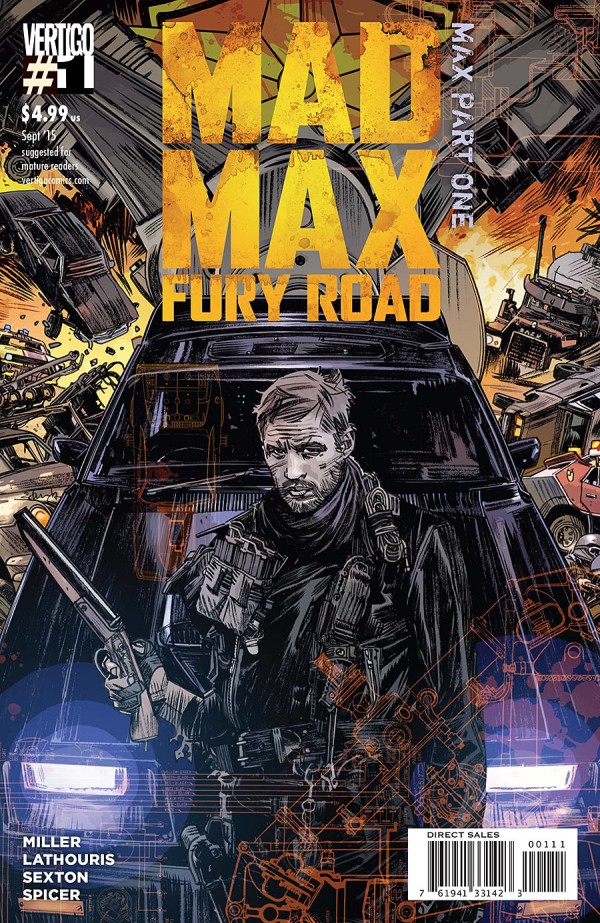 Here are the reasons why:

First, the central character of it is none other than the guy whom this very franchise is named after, Max. Now, don’t get us wrong: we had no problem with Furiosa stealing the show in Fury Road, and like many viewers we thought she was a terrific character. But we are fans of the Mad Max franchise to begin with because of Max, and to see him play more of a supporting part in the latest installment was very slightly disappointing. Relax, we don’t mean this in the sense that we thought the movie was a feminist takeover of a manly franchise or anything like that (as The Return of Kings blog so notoriously griped about). Again, this isn’t to undermine the awesomeness of Furiosa in any way or the cinematic achievement that is Fury Road in general. It’s simply to say that as hardcore Max fans we wanted more Max, which is a completely natural feeling if you grew up on the Mad Max movies and literally waited 30 years for another movie like we did. So if you’re a fan of Max and you just wanted to see him do more in Fury Road, hey, it’s okay:  this is normal and in itself it doesn’t make you a patriarchal oppressor or anti-feminist despite what some overly zealous people might say.

Next, this issue contains the kind of visceral action and gore that the other issues in this limited series so far have not had. That’s not a complaint against the other issues because personally, as readers, we appreciate balance. Some readers apparently didn’t enjoy the fact that the first two issues in the series didn’t have the kind of breakneck action that Fury Road had, but let’s not forget that the comics are supposed to work together with the film as one overarching story.  Fury Road itself may have been a two hour chase scene, but even this masterpiece of a movie stretches the limits of how much an audience can just watch non-stop action without more plot and character development. So from our perspective, to complain about the lack of action in the other issues of these comics is to demand that they stand alone as a story but that was not their intent to begin with. They are a *part* of Fury Road, and the film has more than enough action to satisfy. Just our personal opinion, obviously. 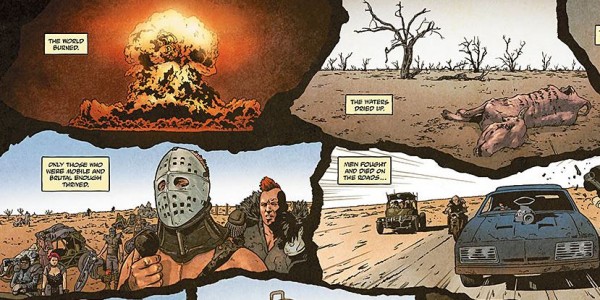 Third, another reason why we had the most fun with this issue is that it felt safe to. What does that mean? It means this:

We happened to like Furiosa #1, the issue preceding this one. But it didn’t feel safe to like it. Reviewing it positively almost felt like stepping through a minefield of cultural politics given the current tense atmosphere of Internet discussion over gender politics. We are aware of the negative criticism directed towards Furiosa #1 (as in this review in io9 or this one in The Mary Sue), and although we respect those opinions we do not agree with them. Once upon a time, if different critics didn’t agree that was simply the end of it. Now if you don’t agree with someone you are a HORRIBLE, BAD PERSON.

Since this is a review of Max #1, it isn’t the time and place to go into detail over all the reasons why we don’t agree with the criticism towards Furiosa #1. But it mostly has to do with the fact that we don’t believe that just because a story involves rape that automatically makes it “rapey” and condoning sexual violence. If that were the case, then even great films like The Accused, Boys Don’t Cry or, for that matter, American Me (because more men get raped than women in the U.S. if you include prison) would be considered exploitative and rapey by such standards. We also don’t believe that you should blame the writer (necessarily) if a character says something that strikes you as shocking or terrible. It is not the writer saying that (necessarily), it is the character in context. And if a character you love (Furiosa) acts and speaks differently from the way you want her to based on the movie (which marks a different stage of her life), perhaps that’s because maybe Furiosa wasn’t always the perfect feminist hero she became in Fury Road. Maybe she is human and was even a bad person at one time. It’s part of her overarching character arc: she went from being complacent of an oppressive system to rebelling against it. To some, this is considered character development. To others, it’s “undoing” everything that was great about Furiosa and Fury Road. Like we said, we do respect that viewpoint; we just don’t agree with it.

Anyway, all that aside, this was one reason why we enjoyed reading Max #1 more than Furiosa #1 even though the quality of the writing and art are pretty much on a par. It felt safe and okay to just like Max #1 for what it’s intended to be: an entertaining comic book about a character we like named Max, not a politically hyper-charged topic that we’d be attacked for if we had the wrong opinion about it. 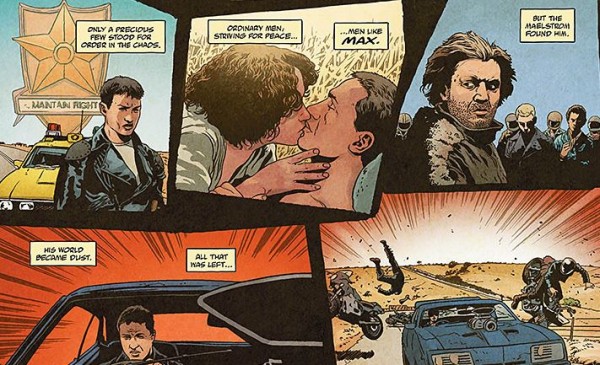 Finally, since it’s better to end on a lighter note, another thing that was cool about this comic was that it incorporates memories from Max’s past via the original trilogy of films. There’s been some confusion among fans discussing Fury Road’s place in the overall canon, with some saying that it is a complete reboot. However, George Miller, to our knowledge, has not actually said that. In fact, most of the things he has said indicates that it’s the same Max in the same world. In an article in the New York Post, Miller is quoted as saying:

“By the time we got [to filming Fury Road], not only had Mel [Gibson] hit all the turbulence in his life, but this is not a ‘Mad Max’ in which he’s an old warrior… He’s meant to be that same contemporary warrior. I guess in the same way that James Bond had been played by various people, it was time to hand over the mantle.”

And of course there’s the fact that Miller is credited for the story in these comics (despite some critics questioning his actual involvement), which means that if Fury Road was a complete reboot he probably wouldn’t have approved of Max’s memories being used the way they are here. Not that he pored over every panel before the comics were published but this is his world, his story, so we’re thinking he was at least generally aware of the larger creative decisions made in the comics.

And going beyond Miller’s credit for story, let us not forget that one of the writers of this comic series, Nico Lathouris, is also credited as one of the writers for the script for Fury Road, the movie. So for those who want to disassociate the comics from the film, while that is certainly your right as a reader/viewer, you may want to consider the double connection of Miller and Lathouris linking comics to film. Instead of saying that the comics undo the greatness of the film, perhaps it’d be more accurate to say that the complete story of Mad Max: Fury Road, from your subjective viewpoint, isn’t as perfect as you would like it to be.

And stories in general, like life itself, don’t always conform to our agendas and expectations.

Not only does Mad Max #1 finally feature the guy we all love, it's also a simpler action yarn more in spirit with the original films, thus making it safer to like and enjoy without being branded as a bad person.

User Rating: Be the first one !