Mad Max Fury Road Blu-ray Review: Yup, You Need To Get It

Although this is a review of the Mad Max: Fury Road Blu-ray we really don’t need to talk about the movie itself again. I mean, what more could be said about it that hasn’t already been said, both positive (for the fans) and negative (for the detractors)?

And so this review will discuss not the movie itself but rather talk about the special features and the transfer.

First of all, the transfer quality is excellent and the film is a thing of beauty to behold. Taking place and shot in the desert as it is, colors obviously favor the brown, yellow and reddish hues, but it’s amazing just how many different shades of these colors the canvas seems to encompass. Seeing the film in the theater, it was all I could do to try to keep track of all the action and the finer points of what was physically occurring on screen, so I wasn’t able to appreciate the finer subtleties of color. While watching this Blu-ray, and being already familiar with the action, I could just sit back and luxuriate in the movie’s visual splendor. And like I said, it’s almost like the movie hacks into the optical centers of your brain, allowing you to better process the sheer range of hues you didn’t know could even exist in the Wasteland. The scorching heat of the desert, the gritty dryness of the sand, the steaming fury of the vehicles and the characters’ roiling emotions are all felt, not just seen. Amidst this arid backdrop, blood is such a living hue of crimson that you feel newly sensitized to it despite the desensitizing effect of all the violent Hollywood movies you’ve seen over the years. 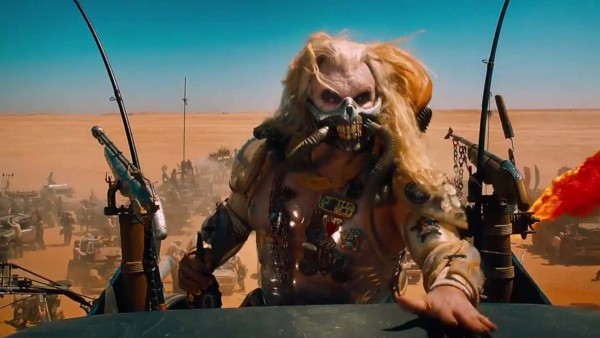 The image has such a squeaky-clean clarity that notwithstanding the inherent grandiosity of the big screen experience, in terms of image resolution this Blu-ray was visually superior to the projection in the theater where I saw Fury Road. Now, I’m no techie so I can’t break that claim down into the mechanics of it, but I’m just reporting what I subjectively experienced.

In fact, I venture to say the Mad Max: Fury Road Blu-ray will be the most gorgeous video presentation you’ll see this year, hands down.

I’m not in a position to rate the audio in a way that would do it justice since my speaker system is of so-so quality. And again, while I am by no means an audiophile I was impressed by the deep, rich, spatial sound. If that was the case with me, those of you with high end sound systems should be in for a real treat. And unlike in a lot of other movies nowadays, the dialogue here is heard very clearly and precisely, right down to Tom Hardy’s grunts and mumbles. And the bass… mmm-mm! Needless to say, I was blown away by how immersive the sound felt even despite the fact I don’t have the greatest sound system, and I can confidently guess that the action sequences here will truly maximize the superior potential of the better audio set-ups out there. In fact, the sound here is so good that seeing-impaired viewers could still have an immersive experience by switching on the descriptive English audio track that describes what’s happening on screen, turn up the sound, and create their own visuals in their imagination. 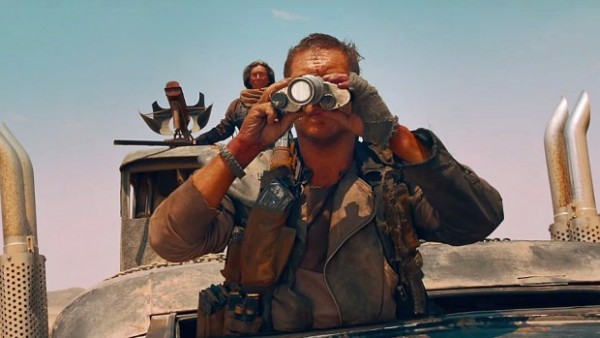 Now for the special features, which I would overall rate as being great in quality but perhaps not as extensive as many die-hard fans would like.

There are seven extra features overall. Five of them are essentially just split sections of what amounts to a full-length behind-the-scenes documentary video about the making of the movie. They all focus on different aspects of the production – for instance, “Maximum Fury” is kind of an overview of how George Miller and his team visually mapped out the movie via storyboards and such, “Fury on Four Wheels” focuses on what for many is what the Mad Max franchise is really all about, the cars, and “The Road Warriors” zooms in on Tom Hardy and Charlize Theron’s experiences shooting the film. Suffice it to say, though, that the sum effect of these videos is that your appreciation of the mind-boggling level of detail, planning and logistics of this masterpiece will be quadrupled. The deleted scenes are nothing to get too excited about, though I’d say that two of the three included here could and should have been included in the final cut.

While more bonus features would have been nice, all in all the incredible picture and sound quality of this disc, even on low-end to mid-range equipment, coupled with the informative quality of the behind-the-scene vids make this Blu-ray, along with the book a true must-have for those who not only love the film but want to boast insider knowledge about the film’s making. Five stars, without a doubt!